BLOG: self building for a family that can’t afford to buy!

A quick recap:
We had found two plots of land, adjacent to one another, one owned by the Council and the other by the Diocese of London. We’d made contact with both of these public service mission landowners, but had we come any nearer to getting a plot for our family home?

Having tracked down the Disposals and Acquisitions Manager (see Part 3) at Enfield Council, I gave him a call. I am not sure what I was expecting, but to my surprise he was an accessible man, warm, friendly and straight talking.

I explained the Right to Build and our desire to remain in the local area, which he deemed reasonable enough. I mentioned that we had identified a couple of council plots and shared my fears that we could not compete with well-resourced Property Developers but he was encouraging. In fact, he reckoned would-be owner-occupiers should be able to outbid developers who have to make profits over-and-above the costs.

However, this was simply a nice way to say that the council was obliged to get full market price on the open market!

I explained that our challenge was that we just wanted to build a family home, whereas a developer might build a lot of flats and outbid us that way! Or just sit on the land waiting for it to increase in value.

I pointed out that this was a growing trend in our area; numerous ‘luxury’ small apartments sold as investments or ‘easy commute from Eurostar and Heathrow’. These commuters would not be building communities or committing to the area long term.

The Disposals Manager got the point and said he would look at the site. He vaguely remembered talking with the church but the site was small, he was understaffed and it was landlocked. He promised to get back to me. 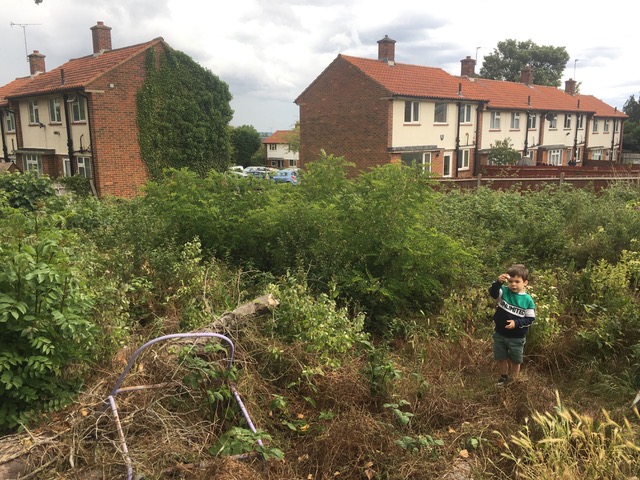 This was interesting; there was a little cul-de-sac and both the church plot and council plot seemed to have access off it. However, the one catch was that it was a ‘private road’.

I had not heard of such a thing or imagined it. It is a fact of life that a house needs a drive or an access to get to the front door. It may be just a strip of pavers but if one stops to reflect for a moment it is a big deal!

That connection to one unremarkable road is a connection to all roads, all houses, all shops – and in this case no development could take place without the access. How had it come about? Was all the land free and then some bits got turned into private houses and gardens? Or was it all private and some bits carved out and given to Her Majesty on our behalf?

The church plot was the unused end of a 170ft long garden. Similar garden plots of the neighbours were developed in 1990 into 3 red brick family houses and the cul-de-sac. After they sold the houses many developers would have got this road ‘adopted’.

This means that it is taken into the public road network, with the developers or owners no longer responsible for the maintenance. But that had not been done in this case, meaning that both plots were landlocked.

Who owned the road? Would they refuse access? Could they demand a Queen’s Ransom?

Perhaps this was our opportunity? It was too small a site for the Council to be much bothered with. But for us it was worth our while trying to unlock it, both for the Church and for the council, and perhaps creating an opportunity to use part of the site for a house for ourselves. Naive? Almost certainly, but hope springs eternal!

My husband had an idea that if the owners of the close wanted an excessive fee, then there might be an alternative solution for access through the vicarage plot – not that the church would want that but it could be a bargaining point. It was a glimmer of an idea.

I spent the next few weeks and months chasing the Disposals Manager and his assistant and looking for the owner of the close. I tried the Land Registry and Highways department but no luck. It turns out that it is far more difficult to get information from the land registry for a piece of land, like a road, that has no specific house address.

Subsequently I found that you can do a detailed map search to identify land but at the time the closest I came was to find out who the developers were of the houses on the close and get their accountant’s details from Companies House. I left a message and emailed asking if I could get into contact with the Developers. The council had not fared any better finding out who owned the road.

It was at this time that I saw an advert for the first ever ‘Right to Build Expo: Unlocking the Potential of Custom & Self Build Housing’. I immediately purchased a ticket and rather amused myself by signing as ‘Director, Fennell and Sons’ – true in a practical sense although it would make for interesting discussion if asked what my company did!

On the day I sat at the front and asked the first question. ‘The Right to Build has given hope to families like ourselves but public bodies such as the Council or Diocese have a duty to get Best Price for their land. How can we compete with a better resourced developer for these plots?’

It was the Chair of the Conference and of National Custom and Self Build Association, Michael Holmes, who gave me the answer: ‘It was not ‘Best Price’ that public bodies such as the Council or Diocese had to get but ‘Best Value’.

This was a significant difference. Best Value was not limited to solely monetary considerations – it should take into account wider benefits to the community and longer term cost benefits beyond the initial receipt for disposal of land. The real obligation would be to deliver value in terms of the public service mission that is their reason for being.

Could we and other families prove ‘best value’ in our desire to build up communities and commit long term? – This was our next challenge.