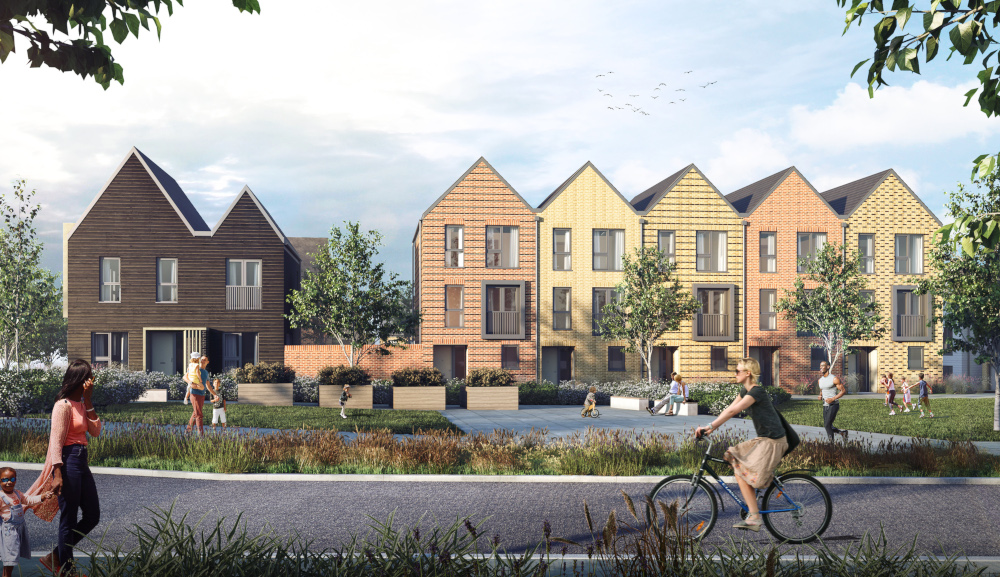 Anyone wanting an owner-commissioned home within commuting distance of London will be pleased to learn that Ebbsfleet Garden City has got the green light for a new custom build community, Alkerden Gateway.

Over the summer, Ebbsfleet Development Corporation’s planning committee granted planning permission for new development, made up of 67 homes, 17 of which are affordable. Purchasers at the site can select from a choice of layouts, materials and fixtures and fittings on each home. Other options include choices around parking spaces, solar PV panels, trees and bird or bat boxes.

Designed by award-winning architect BPTW, construction on the homes has started already, with developer Westerhill Homes building the homes.

Alkerden Gateway is the first key development parcel in Alkerden Village, and is surrounded by parkland, an education campus and other residential developments. In time, Ebbsfleet Garden City will have 15,000 homes

What is a garden city?

Garden communities, which include Ebbsflett, garden towns and villages, have their roots in the Garden City movement that originated at the end of the Victorian era. They were originally envisioned as a new, self sustaining communities that were carefully planned, often like a cartwheel, with concentric circles of housing, gardens and allotments and work spaces radiating from a central hub.

The idea was to capture the best of the city and countryside, while avoiding the worst of both. At their best they were designed to be local, and largely walkable, although the principles involved in the originals at Welwyn and Letchworth Garden Cities were not always applied. There are now many garden towns and cities planned across the country, as the idea has once again come into fashion.

Julian Moat, Planning Director at Westerhill Homes said: “As a Kent-based housebuilder, we are delighted to have secured planning permission from Ebbsfleet Development Corporation for the delivery of our exciting, bespoke custom build homes at Ebbsfleet Garden City.

“By working with an outstanding project team – including BPTW Architecture, LUC landscape design and Knapp Hicks engineers – we have developed an innovative six stage customisation process for all private market homes. This will allow individual purchasers to make a series of external and internal choices to their homes at the point of reservation, meaning the homes can be tailored to suit their design preferences and lifestyle choices.

“We anticipate a strong market demand for customisation in the new build market, and coupled with the strong pull of Garden City living, we fully expect these new homes to prove popular as we now commence on the marketing and delivery aspects of the site.”

Chris Bath, Partner, Architecture at BPTW, said: “Marking the only custom-build phase in the wider Whitecliffe masterplan, for us, Alkerden Gateway, presents an exciting opportunity to design an innovative community that both speaks of its setting, and embraces the full potential of a homeowner-led, organic variety across the scheme.

“Over the past few years, we’ve been proud to be involved in projects at Ebbsfleet Garden City and across the South East, and this development demonstrates our continued commitment to delivering high-quality new homes and transformative new places for the area. We’re delighted to see Alkerden approved at committee and look forward to seeing the next stages of the project come together.”

NaCSBA spokesperson Duncan Hayes said: “As large-scale planned communities, garden communities have the scope to include a diverse range of routes to housing, and NaCSBA would like to see custom and self build included in all garden towns and villages. Alkerden Gateway is a welcome addition to Ebbsfleet Garden Village, and addresses the lack of supply of custom build homes in the market locally.”