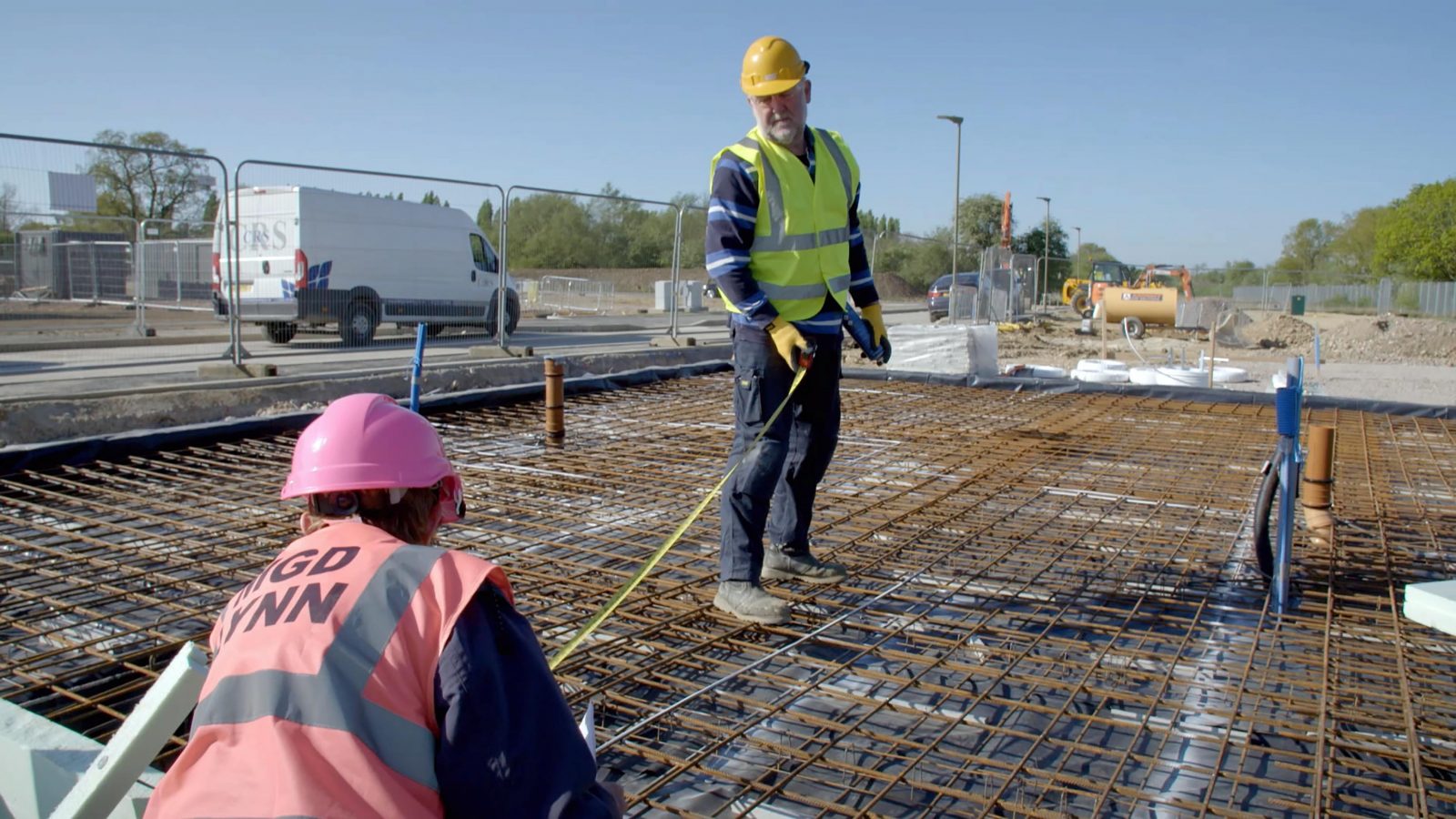 Grand Designs: The Street is available online – Catch up on Channel 4

What started Grand Designs: The Street?

Back in 2010 I went to The Netherlands on a trip (organised by NaCSBA) with a bunch of leaders of local councils and politicians to look at a large self-build town there, Almere, built on reclaimed land near Amsterdam.

The Dutch have always stolen a march on us in terms of housing initiatives. Now, Almere is full of self-built homes, but nine years ago it was already advancing, and I got so excited I had to go and see Channel 4, simply to say ‘it’s amazing what’s happening there, let’s film it’. It was a sort of self-build heaven.

Meanwhile, Cherwell District Council, a small local authority in Bicester, had also been bitten by the Almere bug. In fact, they wanted to replicate Almere and facilitate Britain’s first self-build and custom-build site on a grand scale. They were negotiating with the MOD to buy an old military site as they wanted to see what it would be like if they invited the general public to build their own homes.

It’s this experiment that we’ve been following for the last 5 years in Grand Designs: The Street. In the process, we’ve witnessed the first 10 pioneering households build a street of very different homes at Graven Hill.

But it’s just the start. Ultimately there will be thousands of homes, some social housing, some custom-build as well as self-build. I believe it’s a model that could be copied by local authorities up and down the land. 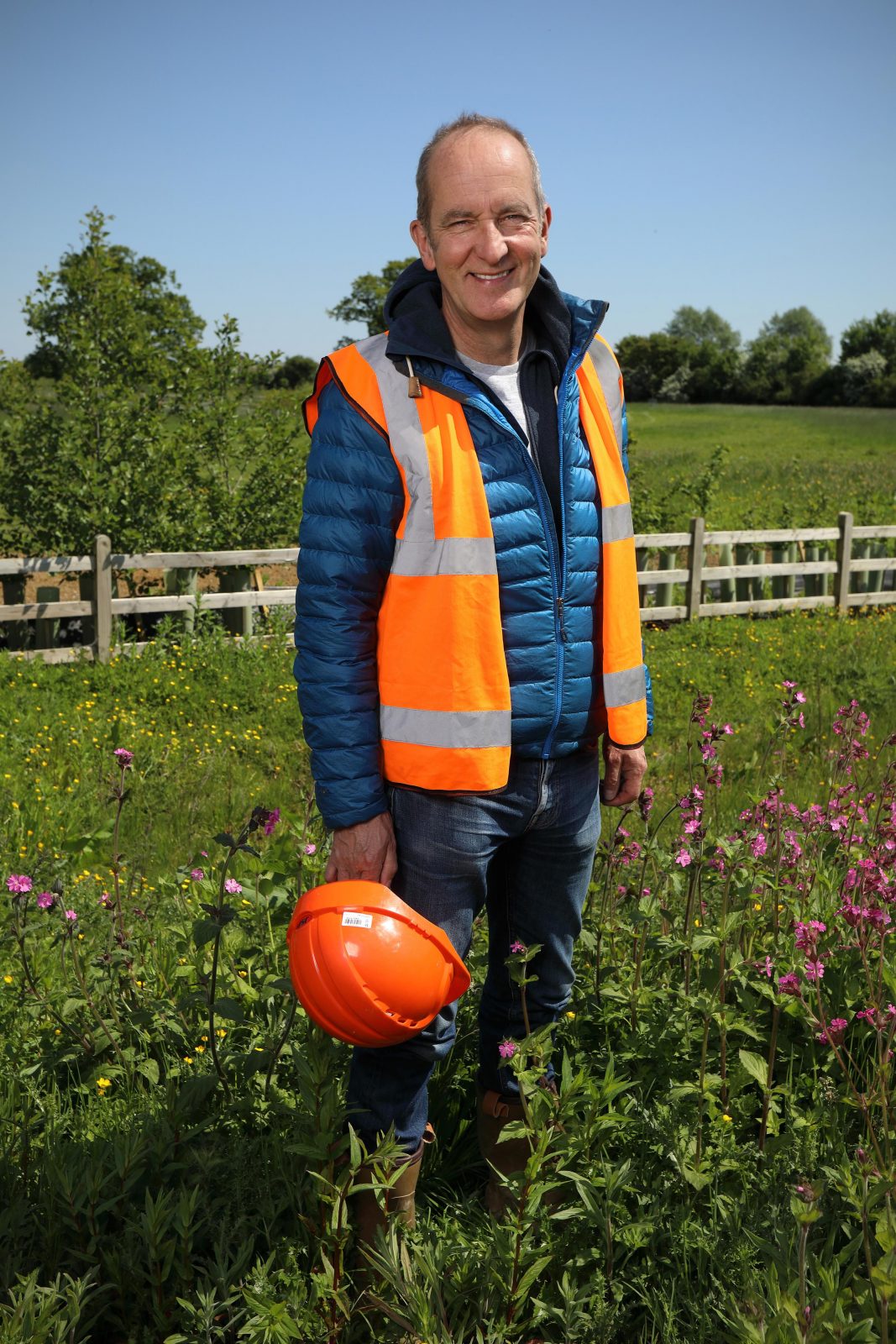 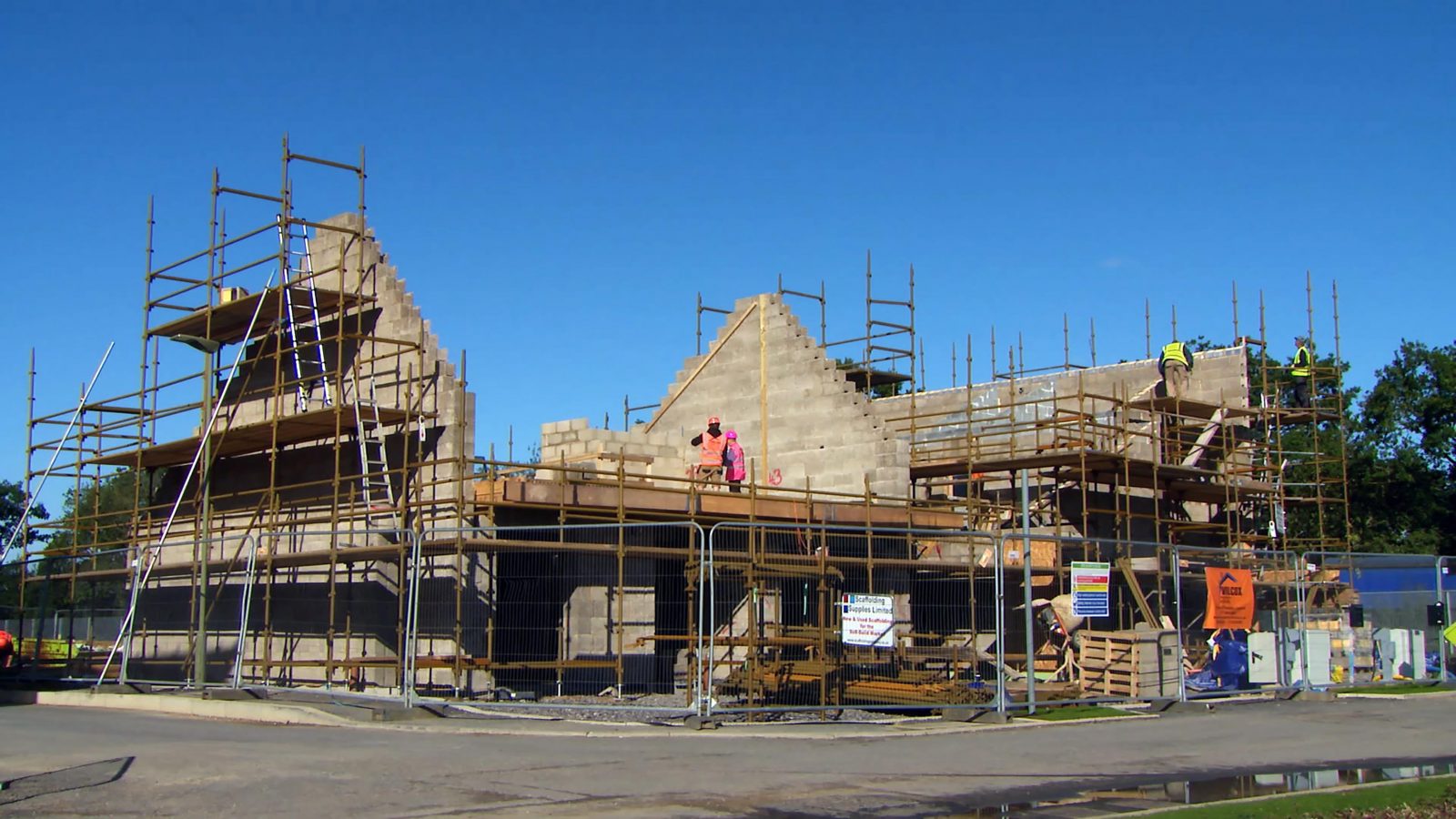 Tell us about the show

It’s very people based and very observational. We followed ten households, all of them from different walks of life, with different budgets and they’re probably at the lower end of what you would expect to see on Grand Designs.

These are more accessible projects costing anything from around £200,000 to £400,000, in terms of value, what they’re getting for their money is good architecture and homes that are really tailored to them – all with the lightest of planning!

Our pioneers are not people with large financial cushions to float on. Building for the first time brings with it a lot of financial, personal and emotional stress – which this series honestly reflects. Relationships get really tested and some fail.

I suppose we see a lot of that in Grand Designs, but goodness me I’ve never seen it so repeatedly and so intensely, as in this series.

These very different households all took a big risk but ultimately, I think they’ve been rewarded for this, with brilliant very individual homes and a great, wild-looking street – which is a sort-of test bed for self-build construction techniques, which I think is just brilliant. No two homes are the same.

WhileThe Street focuses on homes with an affordable budget, do you think it’s possible to stick to budget?

I think two of the households stuck to budget, but self-build is a huge adventure in expression, in architecture, and in terms of discovering what it is that makes us happy and what we like from our environment. People talk about going over budget as if it’s this great cardinal sin, whereas, it usually results as a part of the process because people on the way discover things. On The Street one family wanted a dining room on the first floor, in another household Garrie alters the layout to better suit his wife Sue who’s disabled.

Sometimes building just takes you somewhere that’s far more exciting than you dreamt it would be. Peter and Anita and their teenagers Sam and Lucy, who [and self building]

gave them a larger kitchen, open plan living areas as well as cleverly designed spaces for individuals to retreat to do their own thing. Very important with teenagers – and unthinkable in their previous home.

They did all this and stuck to budget but towards the end of the project Peter realised, he could put an extra bedroom in the attic, and with their two kids it just seemed an obvious thing to do. Suddenly they were discovering what the process of design is. Financially their story was inspiring, the finished house ended up costing almost half as much as it would cost to buy something similar in the area.

Which houses stand out for you and how they were constructed?

It’s really hard for me to disassociate people and their stories from the building. For example, there’s the story of Lynn (pictured) and her house, which is sort of raw with problems. She experienced a great deal of bad luck and it’s very hard not to feel sorry for her, but she emerges in the series with a very beautiful building. It’s one of my favourite buildings, because it’s so eccentric.

Tell us about the eco hemp house

The material, Hempcrete, isn’t common, but it’s certainly earned its pedigree in the UK. It’s a mixture of hemp, which is the stuff they use on the floor of equestrian arenas and is like finely chipped bark and lime. When mixed with water and lime it forms a kind of eco concrete, the texture of horse poo, which you stuff in-between shuttering. The entire house is built from this stuff – it’s highly insulating, structurally sound, has high thermal mass and locks carbon into a building.

Paul and Blanka slogged and crafted most of this house with their bare hands, occasionally with the help of friends and family. When things got really tough, the street lent a hand too, so it’s been very collaborative at times. It’s a house built from friendship really and has a very cool vibe about it. It’s also a beautifully crafted building and a house jam-packed with some very cutting-edge eco-gadgetry which I was fascinated by.

Why do you think Self Build can be so tough emotionally?

I think it’s because our relationships are defined in many ways, both emotionally and structurally. Relationships are sometimes defined with ambitions and dreams, and so to dream of a home together is a huge thing.

Some of the younger couples on the project have moving stories, for example Jack and Hannah, who worked so hard and lived with his Mum to save money on rent.

I think what you realise is just as the dream and the hope of that new home is so very strong it can be a very disconcerting experience when you’re living between houses, in a sort of limbo. It’s all a reminder of how home for us is a very powerful idea.

In terms of it being physically tough, Terry on plot 1 lost a huge amount of weight through self-building and overcame his diabetes. I saw Paul on plot 4 morph from a human rights lawyer into a builder and I witnessed Lynn, who’s 63, lugging huge blocks around on the hottest day of the year.

What challenges did the pioneers face?

Although the planning process was streamlined, they still had to deal with the planners, local council, and building control. This is before they even started building. It was a long list. No one has ever said self-build is easy. 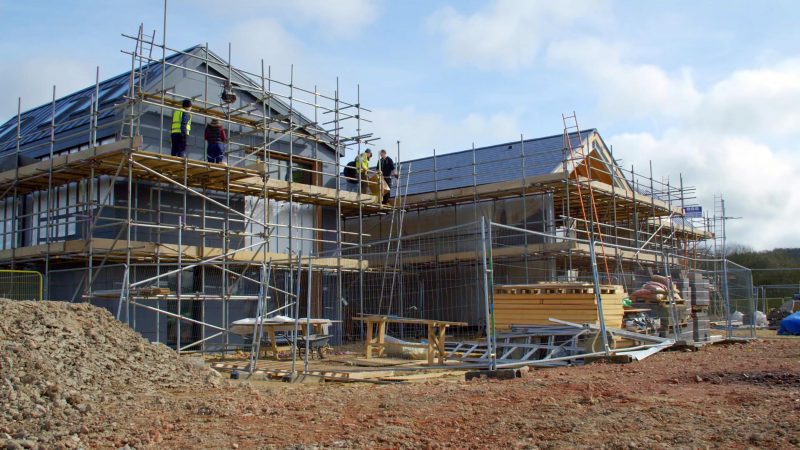 What inspired the pioneers to build?

It’s the idea that you take ordinary people who have got this slight glint of ambition and madness in their eye who say, ‘we can build a house, can’t we? How cool would that be?’ And before you know it, they’ve turned themselves into true radicals. I love that!

All of our pioneers – who started out as ordinary householders – have decided to build a home and they’re now all transformed as individuals and hugely empowered.

As this town of 1900 homes grows, they’re going to become the go-to gurus of how to build with Hempcrete, or how to deal with the mortgage company. They are the self-build wizards of Graven Hill, at once wise and magical.

Why do you recommend Self Building?

I don’t always! I think for many people custom-build is a much safer route, which is where you work with an architect or developer who is building a house for you which is bespoke, but you’re removed from the day to day. However custom build can be more expensive.

The Pioneers all came with a mission to build a house for very personal reasons, but I was fascinated to see how well it all came together and how, in building a house, they could build a community, an astonishing achievement of which they should be proud.[the pioneers] 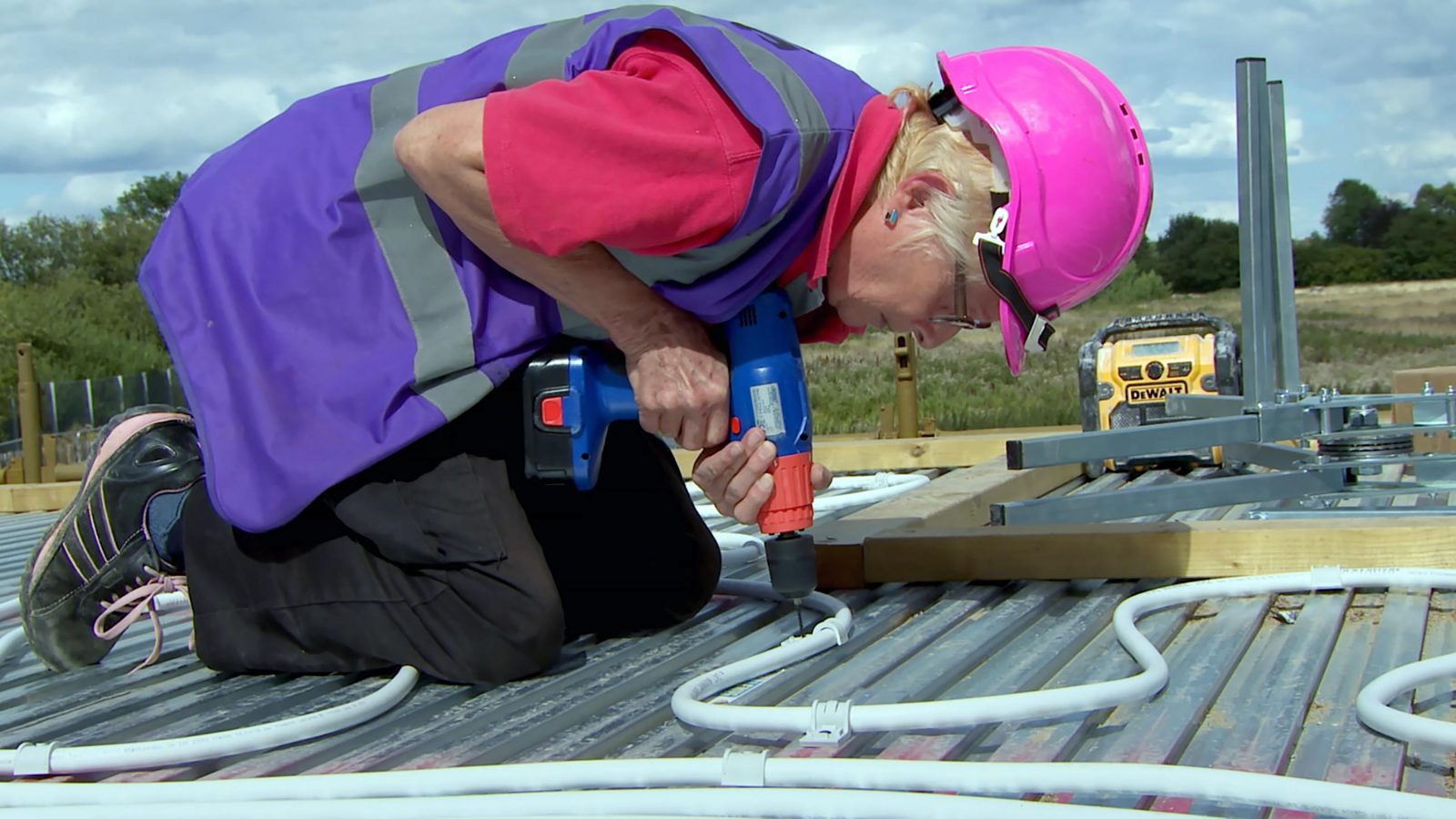 What surprised you most about the process?

The thing that always surprises everybody is how long things take and what I’ve learnt in this series is there no such thing as an average or dull human being. Everyone has a story and usually a pretty fantastic one at that, and when we as a species are pushed out of our comfort zone, when the television is turned off and we are told to put our mobile phones down, all of us can rise to extraordinary levels of performance and adventure.

What I loved to see in this project was the transformation from a bare piece of brown field land next to a railway into a proper street and community. For the last five years the pioneers have slogged away, and they’ve got to know each other so well as a result, some have formed strong new friendships. It is sobering to think that they have spun all this invisible social glue; that this is just the beginning of something.

What misconceptions do people have about Self Building?

I think most people believe because they put up a shelf, they can build a house. Or because they have managed a marketing team, they can manage a team of builders, and that’s not always the case.

Better sometimes to be a good engaged helpful client who devotes time to thinking things through and making the thousands of necessary decision well. Better to have time to buy and bring the bacon sandwiches to site in the morning.

There’s a paradox right at the heart of building that explains why projects overrun and go over budget. It lies in the fact that people have ambitions, dreams and hopes; we’re not machines or spreadsheets.

We invest all our energies in the risk of one big idea which is both the most daring aspect of any project, and at the same time, the most glorious. We push and fight for the quality of that idea and that is what makes Grand Designs so watchable and compelling. It is the force that makes architecture happen.