A new biography has been published sharing the work and vision of Walter Segal, a leading figure in self build in the 1970s when he created several projects, including a whole estate of self build homes, in London. Walter Segal: Self Built Architect

In the book, author and friend of Walter, John McKean tells the story of Segal’s life (1907–85) life, covering his youth and early architectural career in Berlin, before exploring his unique approach to architectural practice – and, specifically, to everyday housing. The book takes in Segal’s work in Switzerland, Mallorca and Egypt, before reviewing his post-war building career in England and the philosophy that drove his work. This included a commitment to self building, which led to him creating a self build community in Lewisham, London (above and below). This has now become a reference point in every historical review of self build in the UK.

Overtime Segal became interested in coming up with the best dwellings for 20th-century towns and his concern for the empowerment of ordinary citizens – and crucially this involved giving them the ability to build their own homes.

Alice Grahame follows with an exploration of the enduring impact of Segal’s timberframing method, looking at how this has led to the possibility of making, and then living within, communities where houses are constructed with a flexible, easily assembled and planet-friendly building system 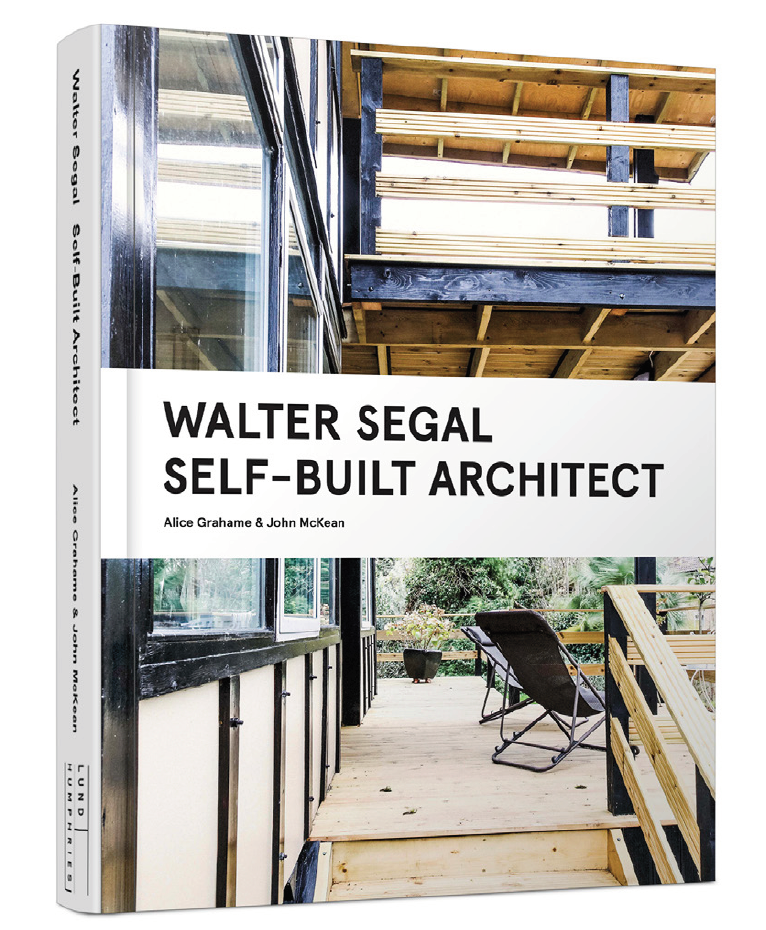 “This book is a huge pleasure because it reveals the man and revels in his energy and wit. It is also a delight because it is so authoritative, written by the two people who know Walter Segal’s life, personality and work better than anyone.” 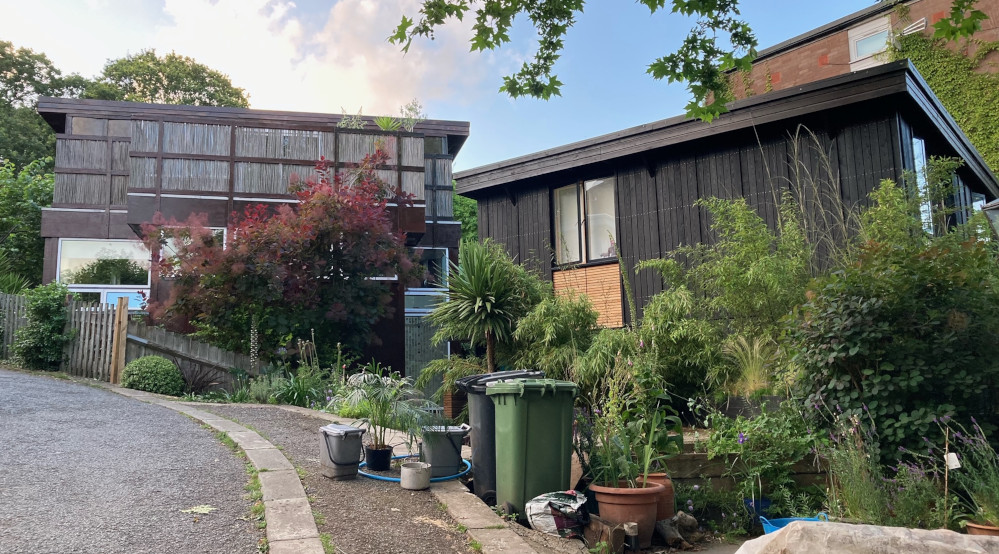 A Professor of Architecture at the University of Brighton for 11 years, John McKean wrote the first monograph on his friend Walter Segal over 30 years ago.

Alice Grahame has written about Walter Segal in The Guardian and architecture and design magazines. She curated an exhibition about Segal – Walters Way: the Self-build Revolution at the Architectural Association Gallery in London.

Anyone considering a self-build scheme as part of a group may want to consider cohousing, and, if so, a new practical guide from UK Cohousing Network offers practical insight to help you achieve your goal. Cohousing is a model in which you have your own private home while sharing common facilities as an intentional community of likeminded individuals.

Cohousing is a distinct approach to designing healthy neighbourhoods, which was developed in Denmark in the 1960s. Following steady growth in the UK over the past 14 years, UK Cohousing Network has responded to demand by publishing the country’s first ever comprehensive ‘how-to’ guide.

Based upon first-hand experience of existing schemes, the guide is essential reading for both housing/planning professionals and community groups, and takes the reader through all the stages of development from conception to living together.

Cohousing communities are usually between 20-40 private dwellings with a common house, shared garden and other facilities. Residents in cohousing schemes share a common vision, and are closely involved in the design, development and long-term management/stewardship of their neighbourhoods. As such, community is at the heart of every project.

Shared spaces vary, and can include a hub for meetings and get-togethers, a shared kitchen (in addition to individual homes’ kitchens) for optional communal meals, shared gardens, laundries or even guest suites for smaller units, to remove the need for redundant bedrooms. 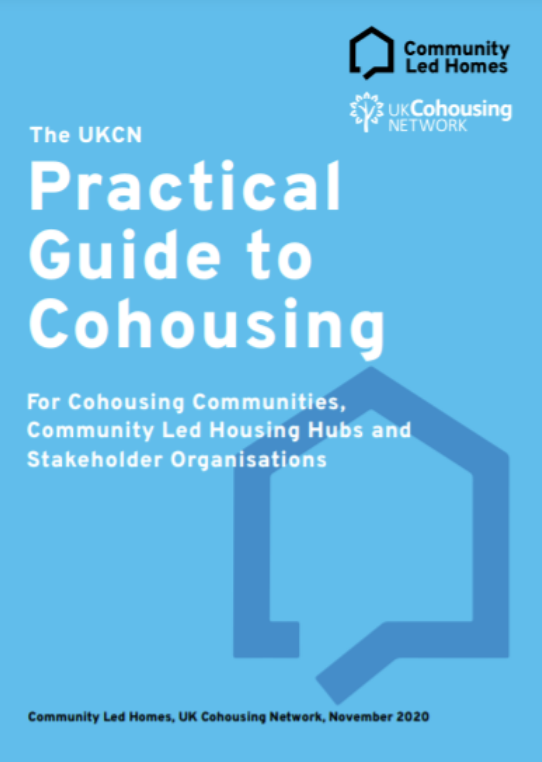 With over 170 pages, the guide takes groups through the entire project pipeline, drawing on experience from cohousing groups and experienced advisors. The guide explains the process of creating a group – including setting a vision, finding a site, planning, building and living in the finished project. It also explains design elements and issues around finance.

Cohousing has well-recognised benefits, and a major element in that it combats isolation and loneliness, making it a popular choice for older people, as well as a route for families and younger people. This also makes it a popular route for groups of people with shared value sets or experiences, such as the LGBTQ community.

The guide is part of the membership package for UK Cohousing Network and is available to the Community Led Homes hub network. The UK Cohousing Network’s website has lots of free information about the route, and the network is part of the Community Led Homes website, which explains the full range of approaches to community led housing, and the differences.

But groups seriously embarking on a cohousing project will find the guide, and the membership that supports it, a valuable resource.
Membership of the UK Cohousing Network costs between £60 annually for individuals looking for groups, £90 a year for established groups, with prices for NGOs and commercial memberships set at £200/£300 per year.

Don’t forget, you can join your local self build register as an individual and as a group. Find yours at the Right to Build Portal

Graven Hill has revealed that one in three of the self-built homes completed between 2018 – 2021 used modern methods of construction (MMC), reflecting that self build leads the way in the adoption of innovative methods. MMC refers to non-traditional methods of building, which includes both off-site manufacturing and innovative on-site techniques, such as insulated concrete formwork (ICF).

MMC is high on the government’s agenda, and it announced the launch of an MMC taskforce in the most recent Budget to examine the ways in which uptake of MMC can be improved. Graven Hill hopes to be part of this research as it feeds into the wider debate.

In 2021 a specialist supplier at Graven Hill is aiming to complete 25 prefabricated homes on site, and since 2018, there have been 34 self and custom build projects built using MMC.

Typically, these houses take 2-3 days to assemble to the watertight stage, with a further 6-7 weeks to finish on site. This is faster than the average bricks and block home, and the builds meet or exceed the high-quality building standards set by Graven Hill.

Each self build at Graven Hill comes with a ‘Plot Passport’ that sets the parameters and guidelines for that specific plot, all of which is pre-approved by the council. Working within this framework, self builders can get planning permission in just 28 days, as opposed to the usual 8-13 weeks. Choosing to build with MMC further increases the speed of completion.

Off-site methods in general are popular with Graven Hill builders, as they offer quick and simple route to construction, with minimal disruption on site.

Karen Curtin, managing director at Graven Hill, said: “The announcement of the MMC taskforce was positive news. All of our Plot Passports allow for the use of MMC techniques, and we believe it will play an important role in the future of housing developments.

“With the help of our specialist suppliers, we have proven that prefabricated homes can be just as high quality and aesthetically beautiful as traditional homes. Offering both speed and affordability, MMC certainly looks to be the way forward for housing and we’re proud to be part of the revolution.”

Not only do the site’s self-build homes benefit from MMC, but so do its custom build new homes. A range of ‘move in ready’ new build homes are available to buy now, with many eligible for Help to Buy. From two- and three-bed terraces to five-bed detached homes, accessibility is at the core of Graven Hill. The flexibility and affordability of MMC ensures this can be achieved without having to compromise on quality.
For more information, get in contact with the Graven Hill team.

The Self Build Portal is the consumer website of the National Custom and Self Build Association (NaCSBA), aimed at supporting would be builders. While 2020 was a well acknowledged shocker for most people, you may be surprised to know that it worked out pretty well for would-be custom and self builders.

Although aimed at professionals working in custom and self build, NaCSBA’s Review of the Year makes for interesting reading for anyone wondering whether they can access an owner-commissioned homes.

Read NaCSBA’s Review of the Year

NaCSBA set up a group to promote Housing Diversification – designed to work to give more people the chance to access a home that suits the.  Members include Federation of Master Builders and the House Builders Association (which represents small- and medium-housebuilders) and community led housing groups, including the UK Cohousing Network and the National Community Land Trust Network.

NaCSBA also lobbies government and responds to various consultations to ensure that self build gets a proper attention, including the Planning for the Future White Paper.

It also conducted research into the nation’s self build aspirations, which it produced along with the Building Societies Association. This found that a third of people are interested in self building in the future. Of this third – the younger age group were the most keen to get started.

The announcement of a new Help to Build Equity Loan scheme should help this 33% of the population that is interested in a self or custom build project, as it offers a valuable route to finance. To date, there’s little information about how this might work – but NaCSBA will share the news as soon as it is finalised.

Behind the scenes, the Right to Build Task Force has also been busy helping local authorities get to grips with the Right to Build, and also produced new Planning Guidance for Custom and Self Build. Although aimed at professionals – it makes for very useful reading if you are preparing a self build for submission for planning.

Celebrating Right to Build Day, the Ipswich Building Society conducted its own research into the custom and self build market. Like NaCSBA and the Building Societies Association’s survey, the Ipswich’s asked 2,000 people about their aspirations and understanding of the custom and self build sector, prompted by the way the pandemic has changed the way we see our homes.

Like NaCSBA’s research, the main finding was that 35% of UK adults (approximately 22 million people) said they would consider a self build project at some point in the future. The NaCSBA/BSA research found a similar figure, that 32% of people were interested in self building – adding empirical weight to the data.

The research found that:

Charlotte Grimshaw, Head of Mortgage Sales at Ipswich Building Society said: “Since the introduction of government legislation on 1 April 2016, self build projects have become a more recognised and viable choice for many people.

“However, finding the perfect plot of land is still something that self builders are concerned about. The introduction of Right to Build was a significant step for this often overlooked sector and with the UK having the lowest known rates of self build homes in the world, coupled with a substantial shortage of homes, local councils would do well to promote these registers more tenaciously, to ensure a continual supply of suitable plots.”

Lack of awareness about self build mortgages

The Ipswich Building Society commented that those planning to embark on a self build project should be aware of the classification of their build with regards to their mortgage application. This research reveals that more than half (52%) of people were unaware they would need a self build mortgage and not a standard residential mortgage for the major renovation of any property or self build project.

Ipswich Building Society advises that if the mortgage applicant has to live in a separate dwelling during the build, or if major renovation work leaves a property without kitchen and/or bathroom facilities for an extended period of time, this would usually fall under most lenders’ criteria for self build.

However, as self build mortgages are more complex than a standard mortgage application, it can be advisable to seek guidance from a mortgage intermediary who has experience in this area.