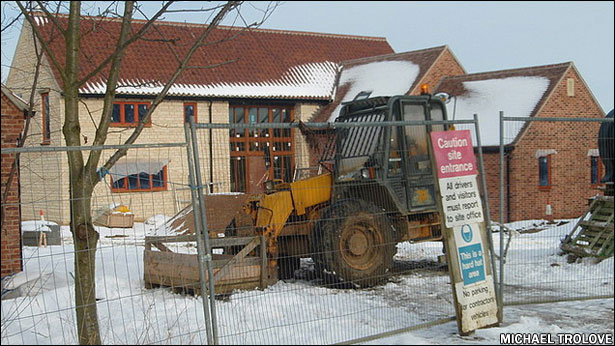 Planning approval has been granted for 150 houses in Kingstone, south west Herefordshire – and all of them could potentially be set aside for custom build.

The development is laid out within a landscape of winding rural lanes and native hedgerows, with lots of natural play areas, allotments and traditional orchards. Herefordshire-based developer Archihaus, an organisation that aims to establish new ways to enable communities to become more sustainable, wants all the new homes to be built to ‘Passivhaus’ standards. The majority of the ‘affordable’ houses will be available for sale, with priority given to local people who live in and around the village.

Jonathan Hines, Director at Archihaus, said: “The idea is that the house shells will be prefabricated offsite and there could well be the potential for some or all these homes to be delivered via the custom build route. We’re not going to be on site until December 2014 – between now and then we’ll explore the levels of interest in delivering the project in this way.”

A group of residents in Greater Manchester has drawn up plans for 37 larger detached houses on council-owned land.

The site is located between Cambridge Street and Lynn Street in Werneth, Oldham. The members of the Werneth Custom Build Association want to procure all the professional services, and a contractor, to build the entire scheme.

The Association is currently seeking approval from the Council for the land to be transferred to it ‘under licence.’

In addition to welcoming this project Oldham council is also looking to set up a special working group to mobilise the council’s resources to support other self build initiatives.

50 low cost self builds proposed for site in Cornwall

A planning application is about to be submitted for 50 low cost self build homes on a large site near Truro in Cornwall.

The Living Landmark Trust is working with a local landowner/developer on plans for the 90-acre development. The scheme could also include a community farm, village centre with live-work units and other amenities, and space for small businesses.

Eight self build plots are being released by Plymouth City Council on two new sites.

Outline planning applications have been submitted for four self build homes at Maidstone Place, Ernesettle, and a further four homes at Lancaster Gardens, Whitleigh. To ensure the plots are bought by genuine self builders rather than developers, people will only be able to purchase one plot each. And, once the property is built, it is likely that that the self builder will have occupy the home for a minimum of three years.

Cabinet member for Finance, Councillor Mark Lowry, whose portfolio includes housing delivery, said: “We really want to encourage self builders and we’re looking at what land we can make available. These two sites are currently vacant and would be ideal.”

If you are interested in the plots contact Plymouth’s self build champion, Amy Luxton, on 01752 307580 or amy.luxton@plymouth.gov.uk.

Specialist community facilitator KoruMK has had exploratory discussions with the Milton Keynes Development Partnership (MKDP). The Partnership, and the local council, are understood to be keen on the idea and are investigating if a pilot project can be progressed.

Many people on tight budgets find it almost impossible to fund, up front, the outright purchase of a building plot. By offering land on a leasehold basis it could make it much more affordable for people on modest incomes to tackle a self build project.

KoruMK is now working with a financial institution to provide loans for the self builders, and it also plans to submit a bid to the HCA’s Custom Build Investment Fund.

Residents in north London to build their own futures

A group of tenants in Waltham Forest is working with Circle Housing (a major housing association) on a scheme to demolish more than 50 disused garages at Penrhyn Grove, and replace them with ten self-finish homes.

The construction of the shells of the new homes will be undertaken by a local contractor, with the tenants involved in the fitting out work. The whole project should be completed by the end of 2014.

The tenants will attend classes at Waltham Forest College for the next four months to learn a range of practical skills from joinery to painting and decorating.

Group leader John Struthers said: “We are all working really hard and are giving up at least 20 hours a week to make this happen. We are all focused on the end result – which will be a brand new home, which will change our lives. “

Luke Chandler, Development Manager for Circle Housing said: “Self build can be immensely empowering for residents as it can give them the ultimate sense of pride in where they live.”

A community self build project for ten homes in Edinburgh has been saved after securing funding from its local council at the last minute.

The Craigmillar Eco Housing Co-operative (CEHC) has received £25,000 from City of Edinburgh Council towards pre-development costs for its scheme at Greendykes Road, Craigmillar.

The project is designed to Passivhaus standards and aims to reduce fuel poverty for residents. The additional funding means a planning application can be submitted in January.

Councillor Cammy Day, Edinburgh’s housing leader, said: “This funding will allow a fantastic project to get off the ground which, on completion, will provide much-needed affordable housing in the area. I also hope it will become an exemplar for future cooperative projects across the city.”

CEHC’s Secretary, Garreth Roberts, said, “This is a great opportunity for Craigmillar and thanks to collaborative work with our partners in the private and public sector, the project has made real progress over the last 18 months.”