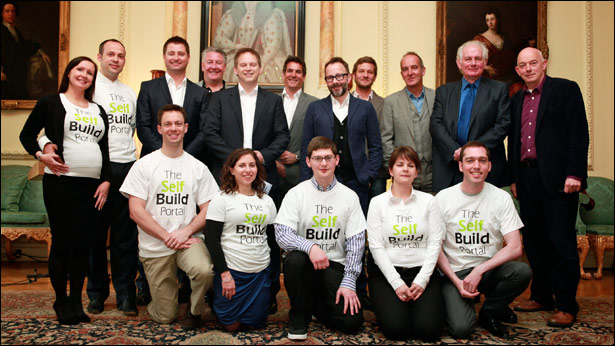 The Self Build Portal received its official launch at Downing Street today.

The brainchild of The National Self Build Association (NaSBA), The Self Build Portal offers a one stop shop for the would-be self builder, providing advice and information on every aspect of building your own home anywhere in the UK.

At the launch, Housing Minister Grant Shapps, announced a package of new support to self home builders, and was joined by NaSBA representatives, would-be self builders and a number of well-known pros including Kevin McCloud, Architecture expert, Presenter of Channel 4’s ‘Grand Designs and Architect, and presenter and independent advisor to the Government on empty homes, George Clarke.

An affordable option for everyone

The Minister said that going down the self-build route was an affordable option for aspiring homeowners and shouldn’t be seen as the preserve of those with deep pockets as a budget of £150,000 is adequate, in most instances, to get a three to four bedroom home built.  The average cost of a ready-made home is now over £232,000.

A growing number of Britons are laying their own foundations with almost 14,000 new homes self-built last year – more than many individual volume housebuilders are building.  However, the self-builder’s share of the market – one in ten of all new homes – is still very small by international standards.

Launching a package of measures today designed to turn this into a mass market opportunity, Mr Shapps said that for the first time, anyone wanting to build their own home from scratch – whatever their budget – will have the help, advice and support they need to get started.

Housing Minister Grant Shapps said: “Last year, self-builders accounted for about 14,000 new homes in this country – more than many large commercial builders.  Yet our self-build industry still lags behind much of the rest of the world, with the opportunity to build your own home seen as something only for a select few.

“That’s why today, I’m pledging to back the self-build boom and support the industry to double in size over the next few years.  As well as a new website giving help and advice, we’re working hard to identify more land for development and have reformed the planning rules to stop people’s aspirations getting tangled in red tape.

“This package of measures is designed to ensure anyone looking to build their own home gets the support they need – and with the numbers of mortgages available set to rise by a massive 141 per cent, there’s never been a better time for people to lay their own foundations.”

Today’s website is just one of a number of measures the industry is driving forward with the support of the Government. Today NaSBA reported to Government on achievements since the launch of its Action Plan last year. In particular the report highlights:

Ted Stevens, NaSBA Chairman, said:  “The new self build portal will help would-be self builders figure out what, realistically, they can afford to build; explain how their budgets can go further if they team up with others or do a portion of the work themselves, and it highlights the parts of the UK where it can be cheaper to find a site and construct a home.”

Kevin McCloud said:  “Self build is sometimes seen as a long, difficult and self-sacrificing process. But with the right planning, help and support it can be enjoyable and – on collective schemes – empowering. I believe we can become a nation of self builders.”